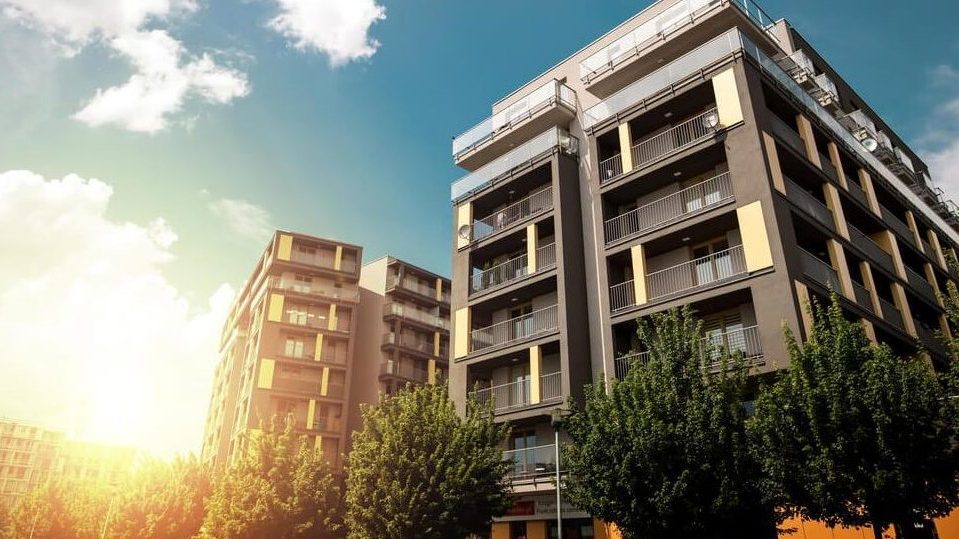 College town markets tend to be solid apartment investment choices. That’s a conclusion that RealPage analysts reach every time the team does a dive into the performances seen across the nation’s smaller metros.

Influencing that perspective, college town economies tend to be comparatively appealing. Some who go to school in these locations end up staying put after graduation, so education levels generally are better than in other spots of similar size. These educated populations support job creation, especially in segments of the economy that pay well.

Quality of life also is a plus for college towns. Cultural options abound in many of these locations. They’re simply places where many people want to live. 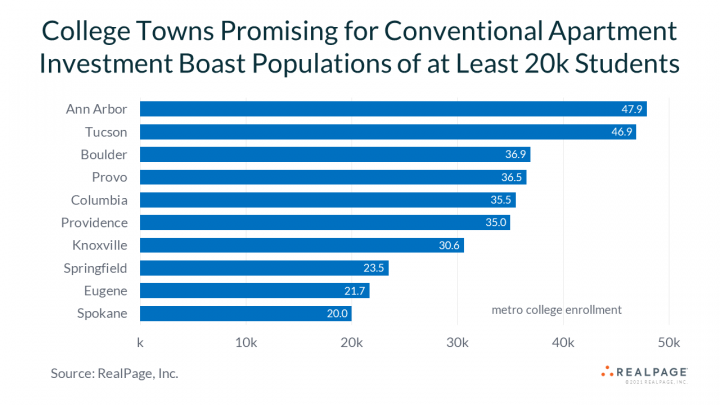 Holding onto its spot from last year’s list, Ann Arbor is a RealPage long-time favorite for conventional apartment sector opportunities.

Ann Arbor has a base of roughly 38,000 conventional apartments. The market’s five-year average occupancy rate is 97.3%, and today’s performance exactly matches that figure. Effective asking rents have grown at an annual pace of 3.5% over the past five years, and the current rate of increase is somewhat better than that at 5.3%.

Conventional properties serve quite a few students here. While enrollment tops 47,000 students at the University of Michigan, there are only about 18,500 beds in the dorms or in purpose-built student housing properties located off campus with another 680 beds scheduled to deliver for Fall 2021.

Ongoing construction of conventional product in Ann Arbor barely registers at all. Fewer than 200 units are on the way, holding near-term inventory growth to just 0.5%.

One distinguishing characteristic for this market is that there’s virtually no risk of enrollment challenges at the University of Michigan, given the school only accepts 23% of those who apply to attend.

New to our list of preferred college town markets in 2021, Boulder is home to the main campus of the University of Colorado, where enrollment totals roughly 37,000 students.

Dorms and purpose-built student housing properties offer some 11,400 beds, so the 29,300 or so conventional apartments are home to a significant block of students.

The existing stock of conventional apartments in Boulder totals around 29,300 units. There tends to be a little more apartment construction here than in most markets on this list. With current building activity topping 900 units, the 3.1% near-term inventory growth rate in this metro is meaningful, but not over the top. 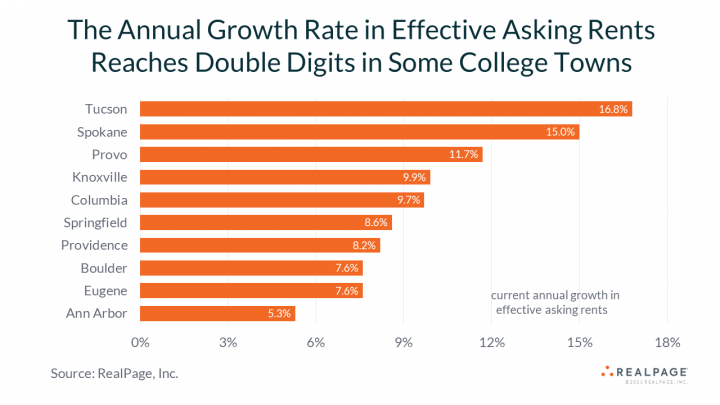 There’s a case to be made for putting several Southeastern Conference towns on the list of favored conventional apartment markets. One of the spots that makes the cut is Columbia.

Enrollment at the University of South Carolina registers at some 35,000 people. Dorms and purpose-built student housing properties can accommodate about 18,400 of these students, while some of the others spill over into the metro’s stock of just over 50,400 conventional apartments.

Note that Columbia is South Carolina’s state capital, so government workers are another key source of apartment demand in this location.

Columbia usually ranks as an OK, but not necessarily great, occupancy performer. Current occupancy of 95.9% tops the five-year norm of 94.3%, but still is the lowest across the metros discussed here. Today’s annual growth pace for effective asking rents is stellar at 9.7%, three times over the five-year average of 3.1%.

Most of the flagship schools in the West region of the country are in sizable metros. One of the exceptions is the University of Oregon, located in Eugene and home to 21,700 students. A downside risk here is that Eugene is perhaps too much of a college town. Outside of the school itself, sizable employers tend to be limited to local government, healthcare providers and the retailers that support the area’s populace.

Still, it’s hard to ignore how incredibly well the apartment base of about 25,300 conventional apartments has performed in recent years. Five-year average annual rent growth of 5.3% is among the strongest rates in any market examined, and today’s year-over-year rent bump reaches 7.5%. Typical occupancy over the past five years is 96.6%, while today’s occupancy rate is spectacular at 98.3%.

Fewer than 100 conventional apartments are under construction, limiting near-term inventory growth to 0.3%, the smallest figure among the markets examined. 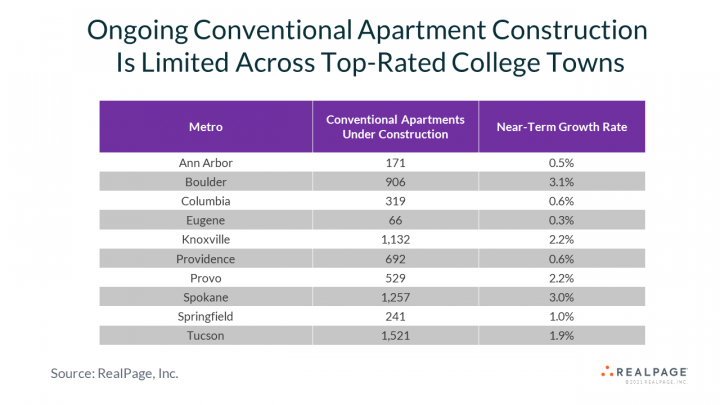 Returning to the Southeastern Conference towns, another favored college market is Knoxville, hanging onto the spot the metro earned on 2020’s list of preferred locations.

Among the positives for Knoxville, total market size of about 51,400 conventional units is bigger than the inventories in most locations examined. Also, the composition of the local economy is comparatively appealing, partly because of the high-end jobs found at the Oak Ridge nuclear power plant and research facility.

Knoxville’s five-year average apartment occupancy rate is 96.5%, and today’s occupancy is even better at a whopping 98.1%. Typical annual growth for effective asking rents during the past five years is 3.9%, and today’s year-over-year bump has exploded to 9.9%.

Dorms and purpose-built student housing in Knoxville can accommodate some 17,100 of the University of Tennessee’s 30,500 or so students. Ongoing construction of just over 1,000 conventional apartments points to 2.2% inventory growth, more than in most locations studied but still not an especially aggressive figure.

Many might not think of Providence as a college town, but there are about 35,000 students here when you combine the enrollments of the University of Rhode Island, Brown University, Providence College and Bryant University. Furthermore, with dorm space limited and purpose-built student housing nearly non-existent, quite a few of these students live in the metro’s base of 106,600 conventional apartments (by far the biggest stock across the metros considered).

Providence is a very undersupplied housing market across all types of product. Today’s conventional apartment occupancy reaches 98.4%, topping the five-year norm of 97%. The annual pace of growth for effective asking rents reaches 8.2%, ahead of the five-year average of 3%.

At roughly 23,600 units, Provo’s conventional apartment count is the smallest across the markets discussed. That small market size leads to some volatility in performance results, with conditions here tending to move around a little more than in most other metros examined.

Today’s metrics are fantastic. Occupancy of 97.8% tops the five-year average by more than 2 full percentage points, and 11.7% annual growth in effective asking rents is more than three times the five-year norm.

Provo’s Brigham Young University has an enrollment of roughly 36,400 students. There’s space for some 15,000 of them in the school’s dorms and purpose-built student housing properties.

While Spokane is perhaps less of a true college town than some of the other locations discussed, about 20,000 students go to school at either Eastern Washington University (not quite 13,000 students) or Gonzaga University (a little more than 7,000 students). Enrollment decline here is a bigger downside risk than at other locations discussed. An applicant acceptance rate already at 96% leaves Eastern Washington with few options available to push enrollment.

Nearly all of Spokane’s students who don’t live in dorms are residents of conventional apartments. Fewer than 1,000 beds are offered in purpose-built student housing properties.

Within Spokane’s base of about 41,500 conventional apartments, occupancy now stands at 98.4%, reaching above the five-year norm that’s already hefty at 97.2%. Annual growth in effective asking rents is huge at 15%, compared to the five-year norm of 5.4%.

The conventional apartment stock in Spokane is scheduled to grow by 3% during the near-term, as nearly 1,300 units are under construction.

Perhaps an under-the-radar choice for college town apartment investment, Springfield’s base of 24,000 or so conventional apartments make it a hair larger than Provo and a hair smaller than Eugene. These conventional units accommodate a sizable block of the 23,500 students who are enrolled at Missouri State University.

Apartment occupancy in Springfield’s conventional apartment stock currently reaches 98.1%, ahead of the market’s five-year average of 97%. Effective asking rents are up 8.6% year-over-year, compared to typical historical growth of 3.3%.

Ongoing construction is limited to fewer than 300 conventional apartments.

Bigger than most of the metros examined in this analysis, Tucson features a base of 81,400 existing conventional apartments. Still, a meaningful block of the metro’s renters in these conventional properties are students, since dorms and purpose-built student housing properties can only accommodate roughly 20% of the 46,900-person total enrollment at the University of Arizona.

Current annual growth in effective asking rents in Tucson is stunningly high at 16.8%. That figure compares to a five-year annual average of 6.1%, already the most aggressive typical price inflation across the markets studied. Today’s occupancy rate is 96.7%, compared to the five-year norm of 95.1%.

Just over 1,500 conventional apartments are now under construction in Tucson. Those additions will grow the local stock by 1.9%.

Knoxville is Among the Nation’s Rent Growth Leaders