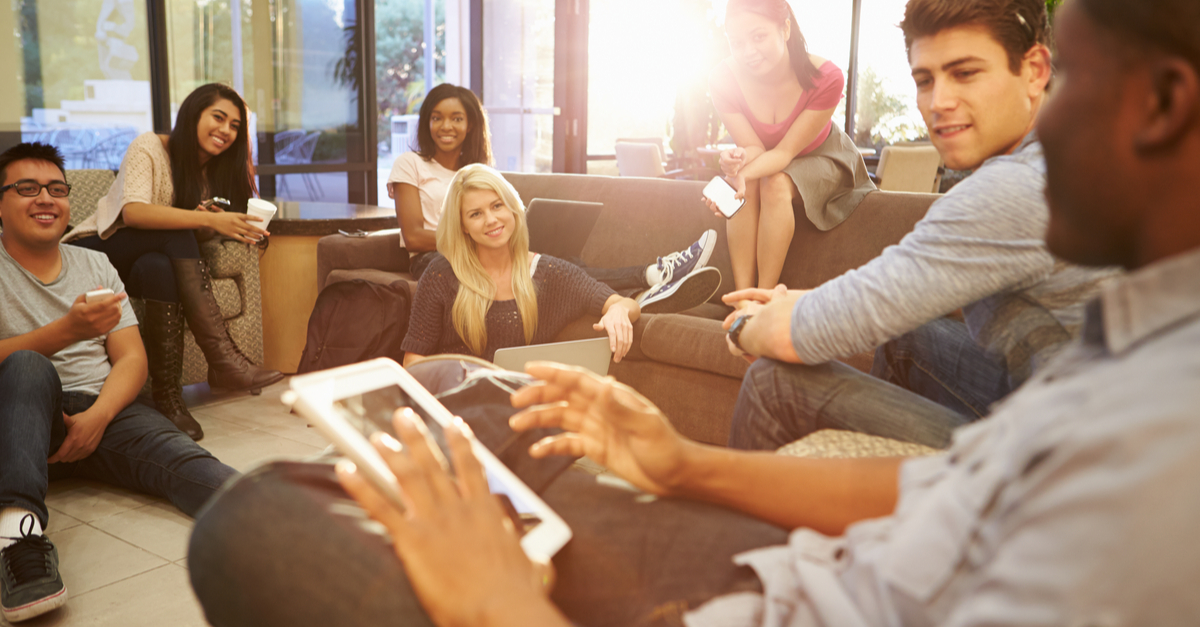 Every current resident in your student living property is worth two in the prospect pool. So how do you hold on to the students who plan to return to school next year in a time like no other?

Student living operators are quickly finding that the best way to do it is by creating a strong sense of community online to mitigate the lack of contact in the real world.  Student housing properties are finding they can bring residents closer together and retain them more effectively using the right messaging and platforms like Community Rewards.

Two months after COVID-19 enveloped the nation, it became clear that properties best equipped to inform, engage, and build community with residents online were benefiting from their tight bonds. Those leveraging Modern Message’s platform Community Rewards, which fosters connections between resident and staff were able to build a greater sense of togetherness and loyalty.

Recent data from Modern Message shows that residents of student living properties using its gamification platform, Community Rewards, stay 12% longer than residents who don’t engage with the program. That’s a big number when translated into the reduced cost of turns, which includes vacancy and marketing expenses.

Creating a strong sense of community through online student engagement also boosts referrals and online reputation, according to Chief Client Officer Audrey Springer, who joined Hinckley on the recent webcast, “Smart Solutions: Elevate the Resident Experience with Community Rewards.” According to the majority of webcast viewers, a good online reputation leads to higher retention rates. But it also helps attract new renters, keeping occupancy up while reducing the costs of marketing to find quality leads.

Gamification incentivizes residents to engage with the community if they are not already doing so. Property managers can identify specific touchpoints – feedback and messaging, for example – and gauge how residents feel about their student housing experience.

Giveaways and contests are particularly pleasing to Gen Z and Millennials, who are today’s student housing renters and are extremely community-focused. Through friendly competition, they can see how they measure up against fellow residents while feeling they are surrounded by friends rather than strangers.

“These generations care about what other people are doing,” says Springer. “On Community Rewards, we actually have a leader board where they can see all the other residents participating in the program and that alone incentivizes them to engage. In addition to that, they can get an additional reward card from the community if they are the top points leader.”

Community Rewards has built a following of more than 5,600 communities nationwide. Among them are student housing apartment communities managed by Campus Advantage, based in Austin, Texas, one of the largest student housing and property management companies in the U.S. Vice President of Leasing Lindsay Brown says Campus Advantage is driving student engagement effectively through Community Rewards by offering points to residents who, for example, take surveys or read the resident handbook. Points are redeemed for gift cards and other rewards.

“Incentives have become more important than ever this season since we’re having to fight for every single lease we can get,” she says. “We are using custom incentives to get someone to take any action, so we’ve put out quite a few surveys to all of our prospects that we’ve had this season and to all of our incoming residents.”

The data has allowed Campus Advantage to monitor the pulse of residents through uncertain times and provided direction on how to improve the living experience at the properties.

“We were able to set up custom incentives to give them points through Modern Message that encourage them to fill those surveys out,” Brown adds. “We got a lot of really great responses.”

The reviews are in

Engaging residents can have effects beyond driving renewals and referrals, including providing marketing content for the property and reviews that strengthen the property’s ORA (Online Reputation Assessment) score.

The ORA scoring system, developed by J Turner Research, has become the industry standard for measuring a property’s online reputation, which is critically important considering that most apartment searches begin on the Internet.

RealPage has entered into an exclusive relationship with J Turner that will allow the integration of Online Reputation Assessment (ORA™) Scores into its Performance Analytics Benchmarking and AI Revenue Management solutions. You can read about this important agreement here.

Modern Message has been a vital component in Campus Advantage’s mission to engage students throughout the resident lifecycle. Developing a sense of community often requires constant communication throughout the lifecycle and starts well in advance.

“The engagement and the renewal discussions start before they’ve even moved in,” Brown explains. “It begins at the time of the lease signing, really, the constant communication, and talking about perks, getting them excited, building friendships prior to moving in.”

“We never want our first interaction with the resident being us knocking on the door asking for a renewal. We want to build that relationship and rapport prior to asking for it.”

Learn more about improving your student living retention and referrals by boosting engagement with Community Rewards.