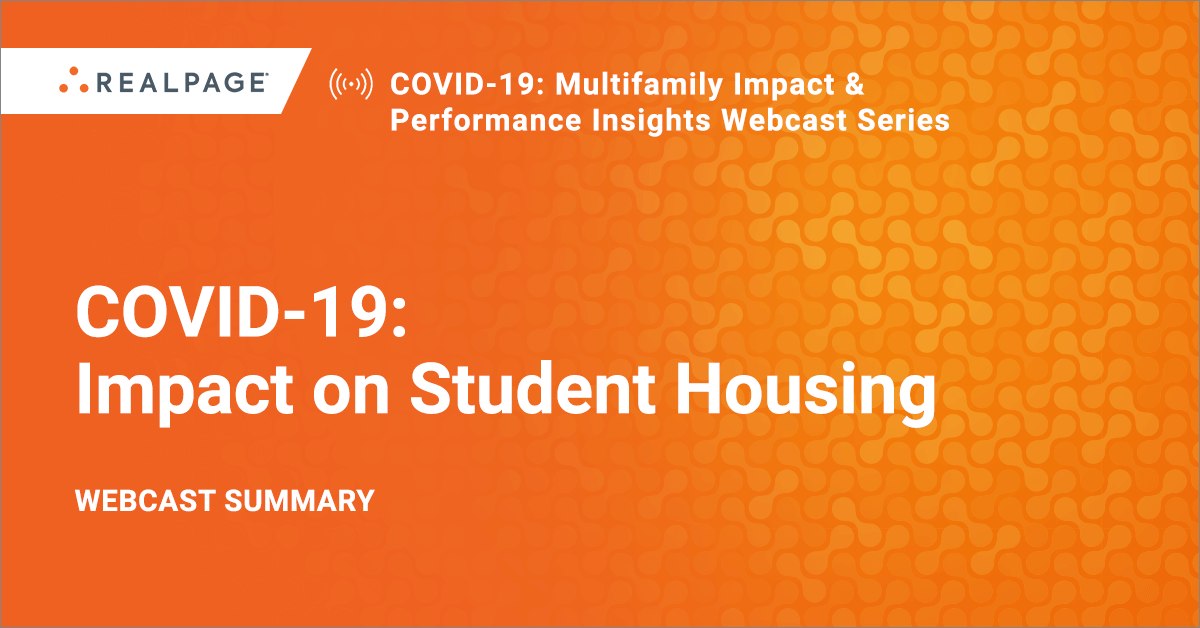 UPDATE ON STUDENT HOUSING OCCUPANCY & PRE-LEASE VELOCITY*
Student Housing tends to be more recession-resilient than other real estate sectors. But the negative impact of COVID-19 is no ordinary downturn, with more than 17.5M unemployed at this point. Nearly all universities have shut down on-campus learning, resulting in a substantial shift in campus-to-campus dynamics with a large segment of college students moving off-campus or returning home.

However, most property managers who responded to RealPage industry surveys said their occupancy hadn’t seen much of a shift yet, due in part to quotes reflected for the full lease-term and some move-outs captured as ‘in-place’ at the time of the survey in mid-March (before government administrations started mandating shelter-in-place orders).

The results of today’s webcast attendee poll, which asked about expectations for Fall 2020 student housing occupancy, saw a majority of 58.6% respond that they expect modest declines. Just under 20% (19.3%) expect no material change,13.3% expect sharp declines, and 8.8% expect occupancy numbers to plummet. April data will be more indicative of occupancy estimates.*

Even more important than current occupancy is fall semester pre-leasing—which is normally prime pre-leasing season and a gold-standard metric. Pre-leasing through February was just above 50% for the U.S., following a similar trajectory as previous years, with properties nearest campus continuing to outperform their more distant peers.

The reasons differentiating the two sides vary. Some have had strong enrollment growth. Others, not enough new supply. Many of the schools in the right column were even below 20% pre-leased and the COVID-19-caused impediment impacts will not help accelerate lease-up, which means operators will have to get more creative to cultivate demand.

RENT GROWTH
Annual rent growth in the Student market has ranged between 1%-2% for any given year over the last decade and currently remains in this range (last year it was 1.7%). However, at the campus level, fluctuations are more extreme. For example, Virginia Tech’s year-over-year rent growth is a little above 8% with one of the highest pre-lease rates.

A handful of other schools, such as UC-Davis, Virginia Commonwealth, Clemson, and Utah State, are also in that 6%- 8% range with performance by distance a contributing factor (a.k.a. “closest to campus cohort”). A surprise contender in this category was Georgia Tech with a YoY rent growth just below 6%, despite Downtown Atlanta’s deluge of new student supply. Conversely, about 20 schools are experiencing rent cuts of 2% or greater, including Ole Miss, Cal-Berkeley and LSU.

NEW SUPPLY
With a huge block of new supply scheduled to deliver this Fall, Student is one sector that truly cannot afford a delay. If that delivery window closes, students could end up in alternative housing, resulting in a detrimental loss of additional revenue in addition to a tarnished reputation that will take time to overcome. To avoid this scenario, it’s often useful to see what’s broken ground by year’s end. Unless it’s an exceptionally small property, you could be overly optimistic if you haven’t broken ground by the end of the fall semester and you’re still expecting to deliver on time the following academic year.

Approximately 48,000 new off-campus beds and about 35,000 on-campus beds are expected to be delivered for Fall 2020. However, COVID-related factors like local moratoriums will delay construction timelines. Expect to see more supply delays this year than ever before, with up to 100% of stock possibly delayed if only one property is scheduled to deliver for a market.

Campus Advantage
Jennifer Cassidy, Executive Vice President and COO for Campus Advantage, shared that their off-campus properties are at about 60% occupancy, dropping to about 50% in commuter markets. However, rents have been collected in over 87% of the properties (the industry is currently averaging 85% collected rents across the board as of April 9), and surveys are showing that 70% expect to return once bans are lifted and campuses reopen. However, the impact on the international segment of the student market will be the hardest hit and holds the greatest unknowns.

Campus Advantage invested early in its virtual leasing efforts and “digital curb appeal.” The current crisis has increased strategic search efforts and the organization is encouraging site staff to get even more creative to engage residents and prospects with online media tools like TikTok highlighting community life. Other changes that have been instituted include no-contact offices with staff rotating a work-from-home schedule. Wipe-down procedures have also been increased per CDC guidelines.

RISE
Courtney Gordon, Senior Vice President of Operations for RISE, noted that their occupancy was about 60% with their off-campus properties and 40% for on-campus beds. The remaining on-campus composition represented mostly foreign students who could not return home and students who had elderly relatives at home that they wanted to protect. As of last week, pre-leasing was down 79% YOY. Gordon reasoned that people were waiting to see what the states and universities would do in the next few months and was optimistic about a surge once campuses opened.

Collected rents were around 85%. However, Gordon is bracing for a bigger dip in May. Updated on-site protocols have included closing the leasing office to the public, along with all amenities except laundry rooms and dog parks, and limiting maintenance tasks to emergencies and essentials. All marketing reach is now digital with on-site staff incorporating TikTok and Instagram content as part of their engagement strategy.

Pricing
Campus Advantage relies on YieldStar Revenue Management as a pricing tool that factors in supply and demand fundamentals to advise the optimal rent price on specific bed types and floorplans. YieldStar is especially effective with determining optimal pricing during market downturns.

Both Cassidy and Gordon noted that neither was planning to make concessions, and the industry as a whole is not advocating concessions. Although some universities have reported crediting room and board back to students, Gordon said that RISE decided not to cancel leases—and received very little push back from parents about the decision. In general, investors are in a holding pattern to see when universities will reopen and current restrictions ease.

Engagement
Resident portals like ActiveBuilding have become paramount for staff to engage with residents. But it’s just as important for corporate to engage with on-site teams and communicate frequently. “The most important advice I can offer others in our industry is to make your teams feel very connected,” Gordon stressed. For example, RISE circulates a weekly newsletter that shares the best ideas from site staff for better engaging with their communities.

John Hinckley, Modern Message Co-Founder and CEO, noted the boosts he’s seen in engagement with the use of community reward points, campaigns, contests and polls that better connect people and cultivate relationships. “With polling, site staff can easily find out what interests residents and organize virtual events like video game tournaments or singing on balconies in solidarity.” John’s #1 tip is for communities to create even more content around shared experiences that showcase the great people living there. “Get residents to share about how great the community is and have this content ready to ramp up leasing over the summer.”

Lasting Impact on Student Housing
Despite the holding pattern of many investors, there is optimism across the Student sector that the market will rebound strongly, with acquisition activity surging in Q3 and Q4 amid a flight to better operators and universities.

In addition to an optimistic market outlook, Gordon and Cassidy shared about which changes they thought would have a lasting impact, especially a deeper embrace of technology to advance the virtual office and provide greater efficiency. “I know we’ll find great digital platforms and different ways to engage, but I’ll probably be adjusting marketing spend, as well, and pump up cleaning spend. People will want to smell clean and cleaning will become synonymous with safety at these sites,” Gordon said.

For the complete discussion on COVID-19: Impact on Student Housing, including answers to viewer questions, watch the webcast on demand anytime here.

*Any comments regarding March data reflect a fluid situation and are considered preliminary.