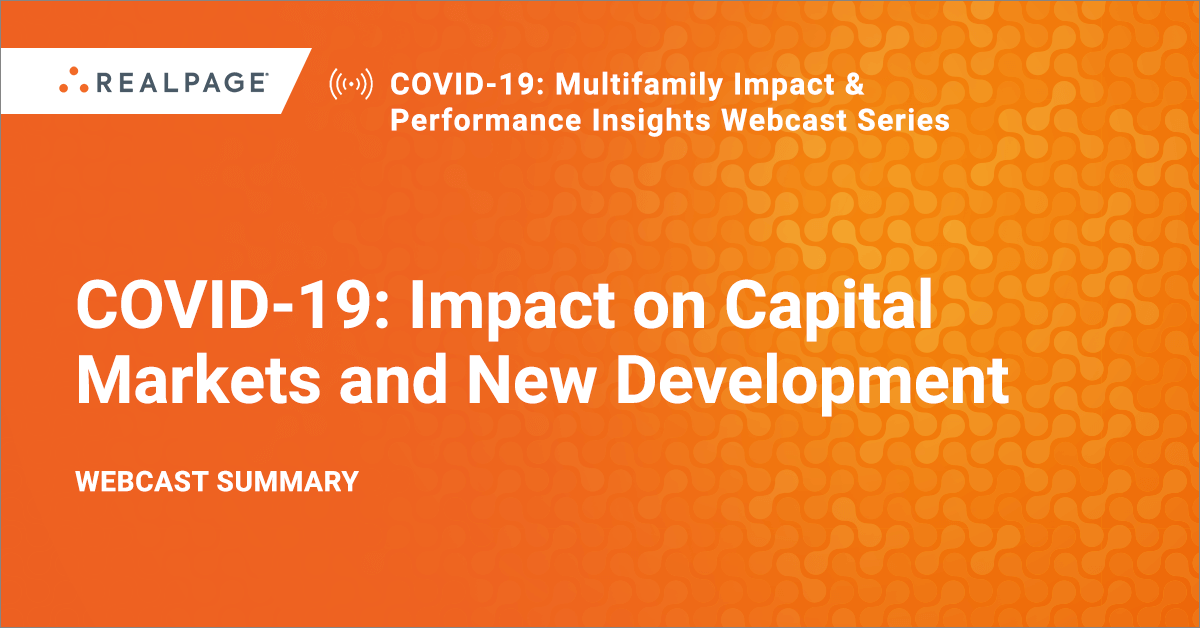 For apartment investors, rent roll is everything driving valuation and cash flow. And it all begins with leasing traffic. The most current leasing indicators compiled from the RealPage platform, servicing 13.5 million apartment units in the U.S., shows leading traffic to property websites is down 15% year-over-year, measured on a rolling 7-day average and on a same-store basis.

Guest card counts are down about 30% year-over-year. Actual lease signings are down even more. Executed new lease volumes plunged 40% year-over-year, again on a same-store basis looking at a rolling 7-day average. 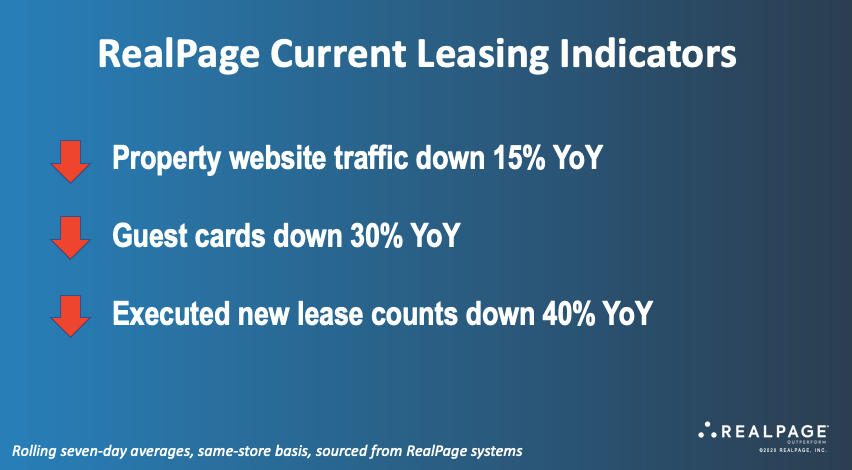 The good news is that everything we’re hearing from property managers is that they’re still seeing some traffic. These prospects tend be very serious shoppers in need of new places to live. But, don’t tether yourself to asking rents for comps. Currently, these rates go unsold the vast majority of the time.

There has also been a big spike in rescinded notices to move out. A rescinded notice is a renter who gave notice they would not renew their lease but then changed their minds. Occupancy rates are also holding steady. Use this time to focus on retention and smart operational execution.

“Understandably, investors are scared now,” said Jim Costello, SVP of Real Capital Analytics, “There is so much uncertainty and risk aversion that we’ve seen bonds increase dramatically, with spikes not seen since the last financial crisis. Investors want a higher cap rate than before because of the escalated uncertainty.” 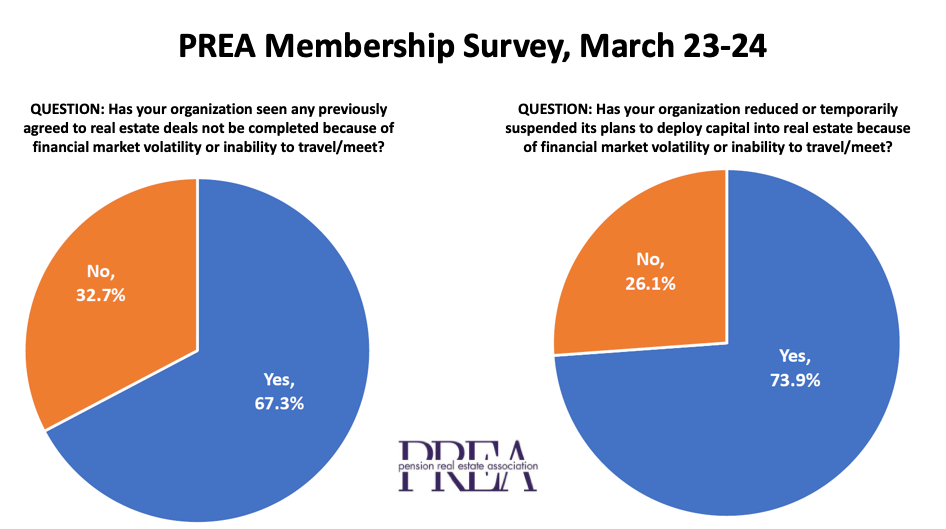 Despite the impediments to acquisition strategies, investors have the advantage of seeing the impact of the crisis on Asia, as a possible near-term indicator of market behavior. The dealing activity has fallen in primary Asian markets like Singapore due to a lack of mobility. Parties can’t engage at offices or conferences, meet clients and prospects or visit properties.

“The challenge will be seeing what happens in May, June and July and what the new normal will be. In China now, restaurants aren’t as crowded as before and people don’t congregate like before. We’ll have to see how differently the market will function. It’s still unknown. The last recession was beneficial for the apartment with backdoor demand. But, with so many jobs lost at once, the conditions during this recession will not be as favorable,” Costello said.

FANNIE MAE, FREDDIE MAC AND IMPLICATIONS OF THE CARES ACT*

The CARES Act, Congress’ stimulus package that went into effect on March 27, offers mortgage forbearance to properties backed by federal loans, including Fannie Mae and Freddie Mac contracts. However, there are no protections for properties with privately held mortgages. There’s also much concern about future liquidity for both new acquisitions and refinancing. Costello noted, “Liquidity at market level is important and will have variation as to how cap rates rise in respective markets.”

The hope is that the Federal Housing Finance Agency (FHFA) will expand the lending caps on Fannie Mae and Freddie Mac to help fill the gaps and that lenders will work with borrowers to find mutually beneficial solutions. The challenges will be difficult to overcome. Costello explained, “The CARES Act was important to stabilize businesses, but it put the onus of forbearance on the special servicers, which will create a capital draw and debt load they are not prepared for. What’s most important is to help ensure special servicers are taken care of and to prevent a freeze in lending.  If special servicers are given access to liquidity and flexible loan payments, this would help mitigate a downward spiral of property prices. It also underscores the uncertainty on the lending side and the need for regulatory support to boost confidence in lending capital.”

It’s a very challenging leasing environment for projects that are trying to build an initial resident base. The drop-off in demand is especially pronounced in luxury properties, the space where most projects in lease-up are going to compete. Just over 900 properties with approximately 224,000 apartments are moving through initial lease-up in the country’s 150 biggest markets.

In North Texas, one of the largest markets, lease-ups are in process on 65 properties with 20,000 units, almost double the volume seen in the next tier of markets that include Washington, D.C., Austin, Los Angeles, Houston, Chicago and Atlanta.

In the top 150 metros, projects physically under construction now total 581,000 units. This is the most building activity seen since the late 1970s to early 1980s when the peak of the Baby Boomer generation first entered the housing market.

Coming into 2020, pipeline stats showed that deliveries were scheduled to spike to 371,000 units—resulting in the biggest block of deliveries over the course of the past decade. However, even before the impact from COVID-19, delayed construction resulted in about 20,000 of the 90,000 apartments (approximately 22%) scheduled for Q1 completion not crossing the finish line.

A survey of key developers conducted by The National Multifamily Housing Council over the past few weeks had several reporting shortages of necessary building materials—and even more citing difficulties with maintaining full construction crews on site. The biggest contributing factor to the deficiencies is the inability of government employees to authorize paperwork or perform site inspections because of mandated lockdowns. As a result, many construction sites are close to shut-down.

*This content is intended to notify readers of new developments in the law. It should not be construed as legal advice or legal opinion on any specific facts or circumstances. The contents are intended for general informational purposes only. You are urged to consult your own attorney concerning your situation and specific legal questions you have.