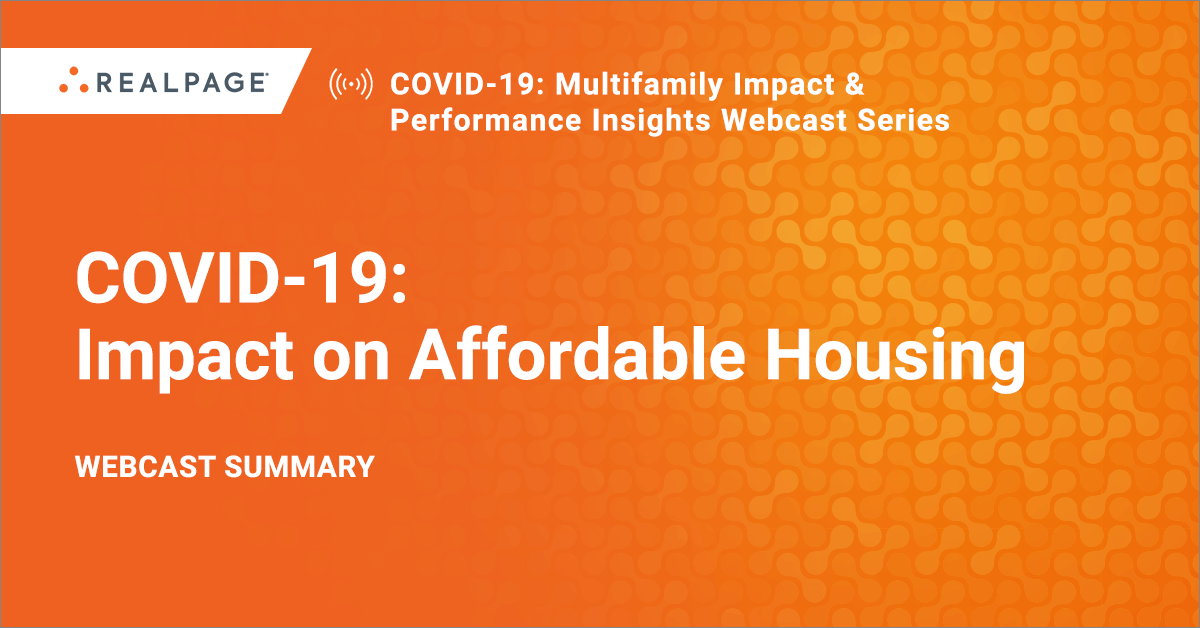 To support the multifamily community through the current COVID-19 crisis, we’ve launched a series of discussions centered around its impact on different aspects of the rental housing industry with the latest data, expert insights and actionable measures stakeholders can take to minimize fallout. Register for upcoming webcasts and watch previous episodes on demand at the COVID-19: Resource Center.

Over the last four weeks, 22 million unemployment claims have been filed—shattering the record for job loss set in 1982, which barely reached 3 million. The detrimental impact on the economy has been most pronounced on hourly employees in the hospitality, travel and retail service sectors, who are typically lower-income and whose inability to pay rent has a direct destabilizing effect on Affordable Housing. On the market rate side, the deepest impact has been on Class C properties with lower-rent units.

Our poll of webcast attendees shows that the issue most of you are concerned about, weighing in at 47.5%, is rent collection. The NMHC’s latest numbers for the market rate side of multifamily show that 84% of residents have paid rent as of the second week in April (up 15 percentage points from the prior week but down 7 percentage points YoY). The ongoing collection rate for Affordable is expected to skew lower than 84%.

Many in the industry have expressed concern over dubious language that has been construed to grant “rent holidays” and forgive rent payments. There is also concern about the disconnect between eviction moratoriums and forbearance time frames that further confuse the Act’s provisions and will, ultimately, result in an overwhelming backlog of evictions and certification delays.

Greg Proctor, Affordable Housing Industry Principal for RealPage, commented, “We will need to make sure the audience—residents, Congress and the American public—understand that if residents aren’t paying the rent, then owners aren’t paying mortgages, and the domino effect will be foreclosures that will only deepen the Affordable Housing crisis. Owners must have a way out.”

On Regulatory Updates, HUD Funding, and Contract Renewals
Larry: HUD and RD (Rural Development) have done a good job of keeping the industry informed with frequently updated Q&A guides that address industry FAQ and guidance on CARES Act provisions. RD was quick to execute a forbearance plan with fast turnaround that allows up to 3 months forbearance on mortgage payments and replacement reserve deposits. I had my application approved within a day.

Sam: One of the pain points has been the funding of PRACs (Project Rental Assistant Contracts). Under the stimulus package, contracts will be funded 100% with ongoing monthly vouchers. Contract renewals are now being completed that dated back to last summer, and in one case we received $3.5M to rehab a property façade.

Larry: We can’t evict under CARES so we’re making sure residents are educated and understand that this is not forbearance and rent is still due. Options we’re offering residents are payment plans and partial payments for non-subsidized properties and interim recertification for subsidized properties. We’re also working with those already in the eviction queue on alternative solutions.

Sam: NAHMA (National Affordable Housing Management Association) is advocating to limit evictions to just COVID-impacted residents and not have a blanket moratorium—which is important but not likely to happen. There will be a post-pandemic wave of evictions with the most trouble in New York City and Philadelphia courts.

Larry: We didn’t have a drop in April, but we’re anticipating May will be a different story.  If residents apply their $600/week unemployment boosts from the Fed, we’ll be okay. We’re also looking at May to see how to incentivize residents to pay rent (e.g., giving credit for paying early or having their utilities paid by us for paying early). We’re also having a logistical issue with receiving voucher checks because there is no one at the agency’s office to cut checks while they’re all at home.

Sam: 80% of our residents paid for April. They’re using lockboxes and payment portals. We’re discouraging any hand delivery or on-site rent boxes. However, the issue with lockboxes is a delay in the U.S. mail nationwide. We’re watching the hotspots closely and are also concerned about May. In some instances, like for some LIHTC properties, we’ve found programs that will supplement rents for those impacted. We’ve also seen pretty good responses via automated payment systems and ACH. Everyone is facing issues because of closed housing authorities, such as getting interim recertifications processed.

Larry: In regard to meeting income requirements for HUD compliance, we have not been given direction [HUD is now saying the $600 is not counted, but that was announced after the session] on how to identify the additional $600 in unemployment income. We have been given direction that the one-time stimulus check is not included as income. I believe the intention is also not to categorize the $600 as income. HUD also has guidance that says we can do certifications without signatures, but we’ll have to get them within 90 days. Our offices are closed to walk-in traffic, but we’ve been managing resident certification in person as long as appointment times are scheduled and social distancing is maintained. This process is working well for move-ins too.

Larry: Technology has pushed our teams to a deeper level of use that is making us more efficient. We’ll also see a shift from in-class seminars to distance learning that will change the way we train and educate our teams.

Sam: A positive outcome is all the tremendous automation and cloud-based processes we’ve implemented like electronic payments to vendors, online portals and the increased use of lockboxes. I would also like to see text messaging incorporated into our automation functions because many of our residents do not have email.

For the complete discussion on COVID-19: Impact on Affordable Housing, including interviews and audience Q&A, watch the webcast on-demand here.

*This content is intended to notify readers of new developments in the law. It should not be construed as legal advice or legal opinion on any specific facts or circumstances. The contents are intended for general informational purposes only. You are urged to consult your own attorney concerning your situation and specific legal questions you have.