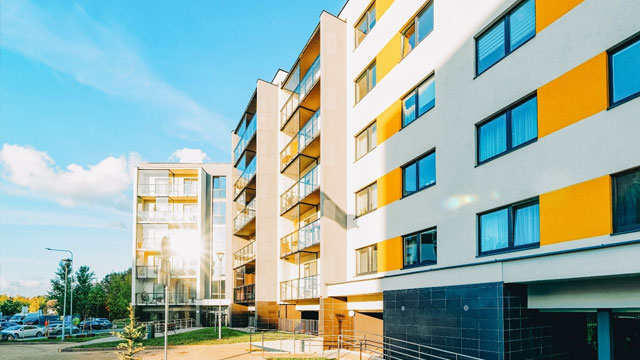 Multifamily companies are taking advantage of higher demand created by unusually slow apartment stock deliveries to fill units, and they don’t mind leaving money on the table to do it. The nation’s rise in occupancy to 96.3 percent – the highest of the current cycle – stems from anticipation that lower job growth and a pickup in deliveries could apply pressure next year.

RealPage Economist Greg Willett told Dallas/Fort Worth multifamily investors and operators movers and shakers in Dallas/Ft. Worth in an economic update at the Marcus & Millichap Multifamily Forum that the strategy suggests weathering a slowdown is less choppy with a full boat.

While the delivery of new stock has dropped to 250,000-260,000 annually, the pace is expected to pick up next year closer to the norm of 300,000-plus. Also, even though economists are backing off from a mild recession in the next few months, the dip in employment growth below last year’s rate of 223,000 jobs per month bears watching.

Willett, whose message wasn’t about the potential for a recession, said the boost in occupancy is some needed padding. He is forecasting that occupancy and rent growth will recede over the next year and a half to two years.

“The reason that operators and others are approaching, it is from the perspective that if we do have the period of slower demand, you would like to start with occupancy as tight as you can get it,” he said. “We now have occupancy that’s about 150 basis points over the long-term norm so that gives us some cushion if we do go into this period when economic expansion slows down and demand for apartments cools off a little bit.”

Based on the U.S. Labor Department’s September job reports, unemployment registered a near-record low of 3.5 percent and job growth increased moderately. Economists believe those trends, combined with the prospects of the Federal Reserve cutting interest rates at least one more time this year, ensures that any chances of a mild recession has been pushed to late 2020.

Willett and analysts at RealPage Analytics believe the national outlook for the next two years beginning in Q4 2019 has occupancy dropping to 95.2 percent and rent growth slightly down from its current 3 percent.

“That’s a still good (occupancy) number and pretty close to essentially full,” he said. “If occupancy holds at that level we think we can continue to push rents in the near term, probably not at the level we see now but having some rent growth in that 2.5 percent range.”

Willett said a healthy Dallas/Fort Worth apartment market − which leads the nation in job growth, demand and construction − will likely feel a pinch if employment numbers continue to tighten.

The D/FW area leads the country in apartment demand this year and mirrors the national occupancy average at about 96 percent. At the same time, operators have experienced solid rent growth in line with national numbers at 2.9 percent, an improvement from a year ago. But the area and others in Texas and across the nation could be susceptible to a job growth issue in cities like in Minneapolis-St. Paul-Bloomington, where businesses simply can’t find help. The area had the lowest jobless rate at the end of 2018 at 2 percent. It’s since climbed to 2.4 percent and ranks sixth behind a contingent of Western U.S. metropolitan areas. But, as Willett puts it, the area simply has run out of people to hire.

“For the country as a whole, Minneapolis is the canary in coal mine, and we’re going to see a lot of places hit the wall on labor availability,” Willett said. “In our industry, we’ve been talking about labor shortages in construction this entire cycle. I think in lots of industries we are going to have labor shortages moving ahead. What’s going to slow growth in the Texas economies? People aren’t going to be there to hire.”

Pace will slow down but not alarmingly

Willett believes North Texas’ economic pace will slow down along with the rest of the country. The area will continue to deliver 20,000-25,000 units annually but if job paces slow, it will be tough to fill them. Occupancy likely will dip to 94.1 percent and average rent growth will ease to 2.5 percent.

“As we look at overall expectation for North Texas over the next couple of years we do think again we’re going to slow down the pace of economic growth,” he said. “And when I say that, don’t interpret that as here comes a scary recession. Interpret it as we think the growth pace will slow down.”

Amenity Valuation: Are You Getting It Right?